I Once Guitar Dueled with Paul Gilbert

This morning while working on a bevy of templates for a client project, I was listening to Paul Gilbert’s “Get Out Of My Yard” album. For what reason I don’t know, but I suddenly thought back to a cool event from my long-haired days. I remembered that I once actually had a guitar duel with this guy.

I don’t remember what year it was precisely, but it was somewhere around 1985 or so. Three intrepid friends of mine and I had moved out to Los Angeles to become rock stars. Like most other LA bands we had a rehearsal studio in a 3- or 4-story building in one of the warehouse districts. The building was just a hive of studio rooms populated with hair bands, metal gods, and hapless wannabes; all of us living or chasing The Dream. 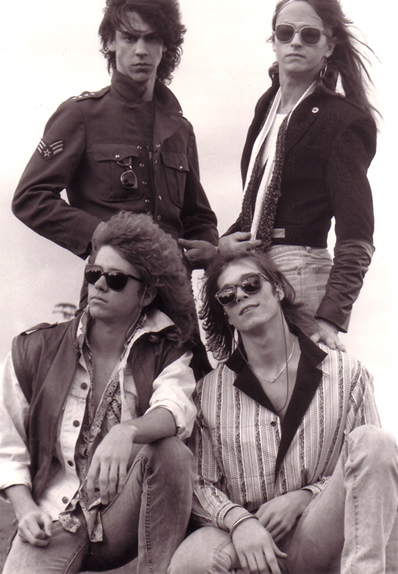 (Above) My bandmates and I circa 1985 or so. That’s me in the lower left, looking wistfully off into the distance, with hair down to the middle of my back. Fun times. 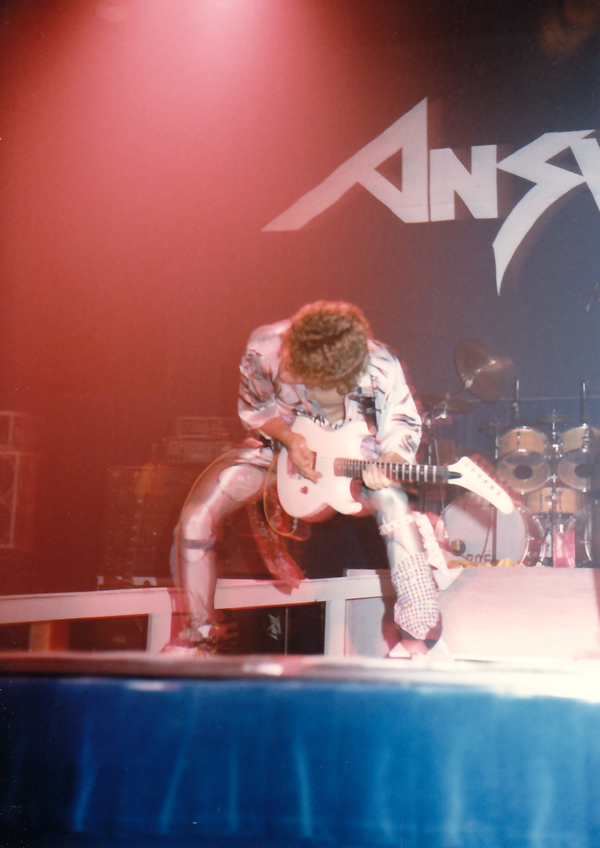 (Above) Here I’m ripping up a solo at some concert (must be early days, as I’ve got noticeably shorter hair). Go ahead, laugh at my bandanas and spandex.

Our rehearsal building was home to several popular local bands and well-known touring groups. Most I forget, but I remember that King Kobra rehearsed downstairs and Gene Simmons came by to see them now and then (I passed him in the halls more than once). We were on the second floor and on the third floor right above our space was Racer X’s rehearsal space; which meant that Paul Gilbert rehearsed right above me. I’m not sure just how popular they were back then among club goers, as they were just getting started, but among rock guitarists that Racer X guitar guy was the man.

Anyway, the studios—the walls especially—were pretty well insulated, but at night (when most of the bands were going at it) the whole building seemed to ooze a cacophony of pulses, thumps, and pink noise. During the day, when most of the studios were empty, muffled yet distinct melodies could be heard, especially through the ceilings and floors. Not having another job then, I would often spend the whole day in our studio playing around, working on technique, and writing new music.

From time to time I’d listen to the guitar riffs I heard coming from the studio above me. Now, for a while I didn’t know just who it was who rehearsed above my band’s studio. All I knew was that the guitarist up there was often doing what I was doing during the day—practicing—and that he was pretty damn good. Clearly, he could hear me, too, and sometimes we’d even toss riffs back and forth. Nothing serious; he’d play a little something and then I’d play a little something, and we’d repeat a few times then get back to working on our own things. One day, though, stuff got serious.

I was working on a complicated little riff for a new song, playing it over and over to get it just right. I stopped and heard the same riff repeated by the guy above my ceiling. So I played it again and added a bit more on the end, and waited. The riff plus the little extra came back to me through the ceiling exactly as I played it. Huh. Oh yeah? Try this. I launched into a bit of impromptu shredding for 5 or 6 seconds. And waited. A similar dose of shred came back to me, darn close to what I’d played, but with a little added technicality upping the game. Throwdown time. I ripped open a river of 8-finger-hammer-ons leading into my best (amateur) Ingwie Malmsteen impression, ending with copious use of screaming harmonics helped along with my tremolo bar. Your turn, buddy.

…Fade to black.
Okay, anyone familiar with Paul Gilbert’s guitar playing can tell you that among the technically-monstrous virtuoso rock guitar players on the planet Paul has long been the most technical, most monstrous, and most virtuoso of them all. Yeah, I had just kicked a hornet’s nest. In my defense, I was not aware then that the guy on the other end of my little duel was Paul Gilbert. Okay?

Back to frame…
When I sent my last in-your-face missive to my opponent, I expected him to give as good as he got. But what I got was an eruption of face-searing, mind-ripping guitar wizardry, the likes of which I’d never experienced. The guy had been toying with me and had decided that the time for child’s play was over. He simply unleashed the beast.

I’m not entirely sure what happened next, but I remember waking up with a telltale trickle of blood from my nose and the side of my mouth. Okay, not really, but he totally ripped me a new one. His response went on for 2 or 3 minutes; 2 or 3 minutes of relentless, technical assault leaving no room for debate over whether or not our duel was done. It was done. I was done. I remember that I just sort of laughed and did a little “dink donk” on my guitar to signify my defeat. I’ll bet he snickered.

I never actually met Paul and we never dueled again. When I found out some days or weeks later that it was Racer X up there and Paul Gilbert I’d been trading riffs with, it explained a lot and I felt a bit less cowed. Of course I’d come up short against him. Heck, now my loss in the guitar duel was a cool thing! Right?

Anyway, the fact that today I’m a designer and Paul is still shredding up the world with his guitar is story enough. In fact, I have no idea why I’m writing this and sharing it except that it’s a cool memory for me and I just happen to be listening to his music this morning. You keep rockin’, Paul, and I’ll keep designing and I’ll definitely keep listening to your mindblowing artistry.